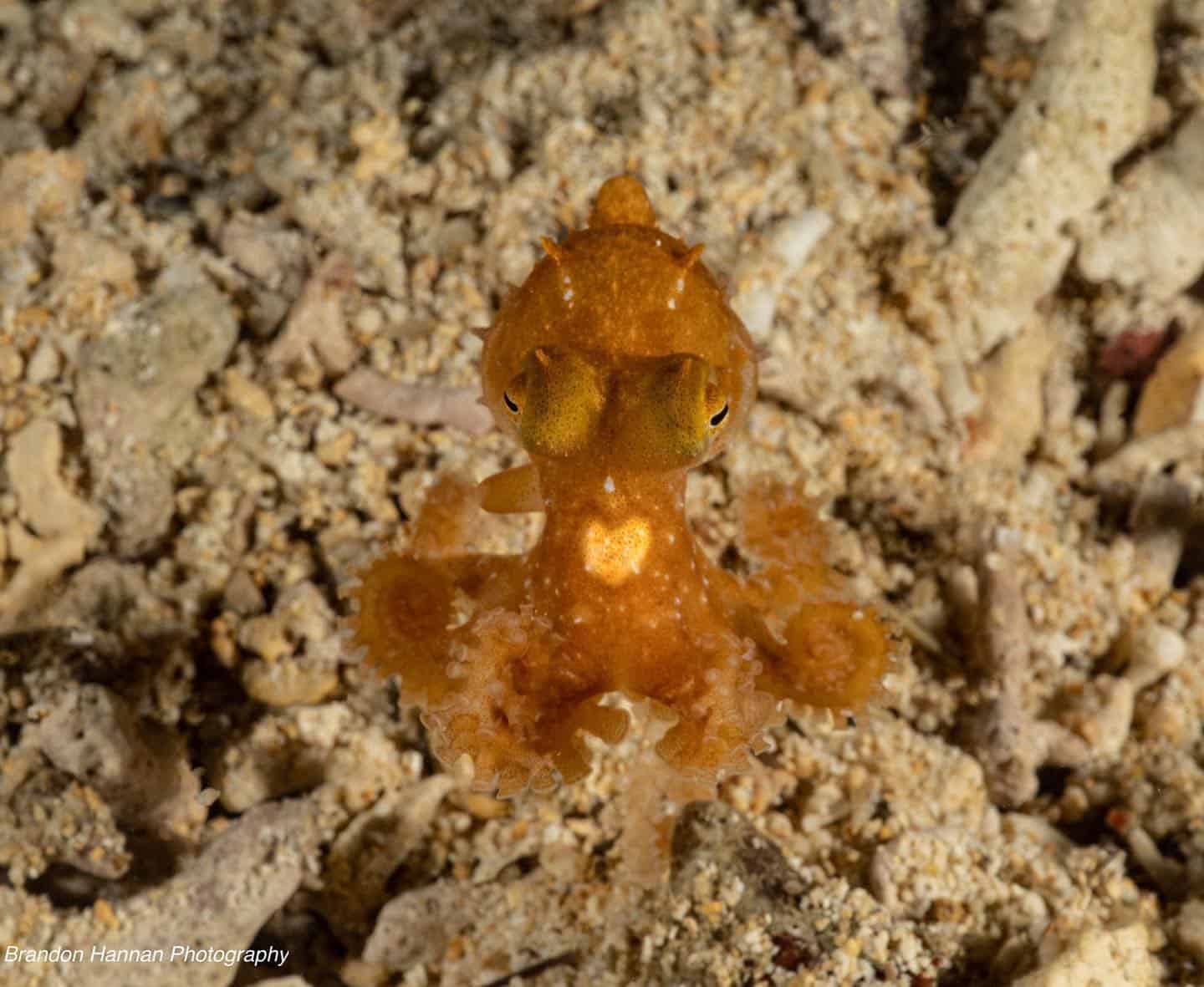 Ever find yourself pondering about an octopus’s life? How long do they live? Do they adopt a healthy lifestyle in the hopes that they will live longer? What species lives the longest? Do females outlive males or vice versa? I know- it’s a lot! From popping out into the world from a tiny egg case to growing into the 8-arm wonders we all love, let’s take a journey through an octopus’s lifespan.

Roughly 300 species of octopus live in the ocean (I know- crazy right?!?), which naturally leads to many ways to live that octopus life.

In general, octopuses have a relatively short lifespan.

For example, the Common Octopus, Mimic Octopus, and Blue-Ringed Octopus live for around 12 – 18 months whereas the Giant Pacific Octopus can have a lifespan of 3-5 years!

The one thing they all have in common is how they come in and out of this world. The rest is dependent on the species.

The longest living known octopus is the Northern Giant Pacific Octopus (Enteroctopus dofleini) who can survive between 3-5 years in the wild. However, a Deep Sea Octopus (Graneledone boreopacifica) was reported guarding its eggs for 4.5 years!

Typically, octopuses spend about a quarter of their lives brooding, which means the Deep Sea Octopus’s lifespan could be 16-18 years!

That would make it the oldest cephalopod species… more deep-sea exploration, please!

On the other end of the spectrum, one of the tiniest octopuses, Star-Sucker Pygmy Octopus (Octopus wolfi), only lives for about 6 months.

A Glimpse At Every Stage Of An Octopus’s Life

Here is a breakdown of what an octopus goes through in its one life- everything from birth to death!

Thanks to Octo-Mom, baby octopuses enter the world from an egg sac no greater than a pinky nail.

After the mama octopuses braids all of her eggs in long festoons, the octopuses are incubated for about 30-40 days (sometimes longer)!

After incubating, they pop out from their tiny egg case that has been nestled amongst hundreds, or even thousands, of others.

Incubation periods can be wildly different between species! A female Giant Pacific Octopus will lay 120,000 – 400,000 eggs, which will hatch after about 6 months.

Compare that to the Deep-Sea Octopus (Graneledone boreopacifica), who only lays 155 – 165 but will care for them for up to 53 months!

Tip: If you want to know more about mama octopuses and how they give birth, check out this awesome blog post to get the inside scoop!

If you have ever seen a video of eggs hatching, you will see that the octopus is white while inside the egg sac and then turns grape purple right after it pops out! Super cool right!?

Baby octopuses spring forth into the world as miniature octopuses with:

They swim around using jet propulsion just like adults, too!

How many octopus eggs actually hatch?

Unfortunately, survival rates for baby octopuses are low across all species with only one or two surviving out of the whole clutch. Due to their small size, and having almost no defenses when they are born, the mama octopus must lay thousands so that a small few will go on to grow into a full-size octopus and keep the population going.

Warmer temperatures generally allow babies to develop and hatch out faster because it increases metabolic processes. In colder waters, eggs incubate for a longer time.

Take our octopus of the deep, Graneledone boreopacifica who cares for her eggs for 53 months. She lives in 3°C water, which means her babies will develop slower. These near-freezing water temperatures allows for her to keep her metabolism super low which is how she is able to incubate for so long!

After leaving their egg cases, certain species of baby octopus swim towards the surface where they spend their early days floating amongst plankton. This period of their lives is when they are especially vulnerable.

Almost everything in the ocean is bigger than an octopus hatchling which means even the tiniest fish is now a predator who can easily gobble them up!

This is the planktonic stage where octopus hatchlings are called paralarvae. Think of it as the toddler years- in-between the hatchling and subadult phases.

A study looking at Common Octopus paralarvae showed that they feed on zooplankton in the same manner as an adult would feed on a crab! They attack, immobilize, drill into, and then digest their prey using their radula and beak.

The next life stage for an octopus is called a subadult (think teenage years).

For benthic octopus species, this means settling on a reef and eating as much as possible. A Giant Pacific Octopus, for example, can increase their body weight by 1% per day. Having a short life means the octopus can’t waste time growing.

The bigger it gets, the better the chances of survival!

Once they reach adulthood, octopuses spend most of their time in solitary. No big hangouts or lunch dates for these cephalopods. They:

Think of an octopus’s den as its sanctuary. They can fully fit inside and the opening of the den is too small for predators to get through.

There are some perks to being super squishy! An octopus’s den is the safest place in the ocean for them.

Stage 4: Parenthood And Their Ultimate Demise

The death of an octopus is inexplicably linked with reproduction.

After mating, both males and females will die in a process known as senescence. In an octopus, this time is characterized by:

Females enter this stage after they lay their eggs, sacrificing themselves to protect their babies till they hatch. Males also die shortly after mating from the same process…unless they’re not careful.

In some species, like the Maori Octopus, the female will attempt to eat the male after mating… Yeah, I know it sounds a bit… intense BUT it’s a good source of protein and she needs all the energy she can get to lay her eggs and care for them.

From Beginning To End: This is An Octopus’s Lifespan!

And… that completes an octopus’s circle of life!

If aliens landed long ago- you can see why many think they might live underwater. The female blanket octopus has a disproportionately sized spouse, a cape that would make any superhero jealous, and even rips off the stinging tentacles of the Portuguese Man O’War to use as a nunchuck-like defense strategy! — and these are… 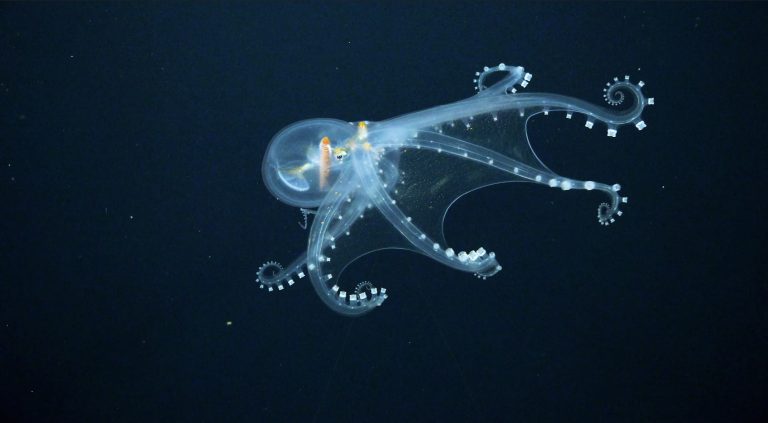 This website uses cookies to improve your experience while you navigate through the website. Out of these, the cookies that are categorized as necessary are stored on your browser as they are essential for the working of basic functionalities of the website. We also use third-party cookies that help us analyze and understand how you use this website. These cookies will be stored in your browser only with your consent. You also have the option to opt-out of these cookies. But opting out of some of these cookies may affect your browsing experience.
Necessary Always Enabled
Necessary cookies are absolutely essential for the website to function properly. These cookies ensure basic functionalities and security features of the website, anonymously.
Functional
Functional cookies help to perform certain functionalities like sharing the content of the website on social media platforms, collect feedbacks, and other third-party features.
Performance
Performance cookies are used to understand and analyze the key performance indexes of the website which helps in delivering a better user experience for the visitors.
Analytics
Analytical cookies are used to understand how visitors interact with the website. These cookies help provide information on metrics the number of visitors, bounce rate, traffic source, etc.
Advertisement
Advertisement cookies are used to provide visitors with relevant ads and marketing campaigns. These cookies track visitors across websites and collect information to provide customized ads.
Others
Other uncategorized cookies are those that are being analyzed and have not been classified into a category as yet.
SAVE & ACCEPT
341 shares
341 shares