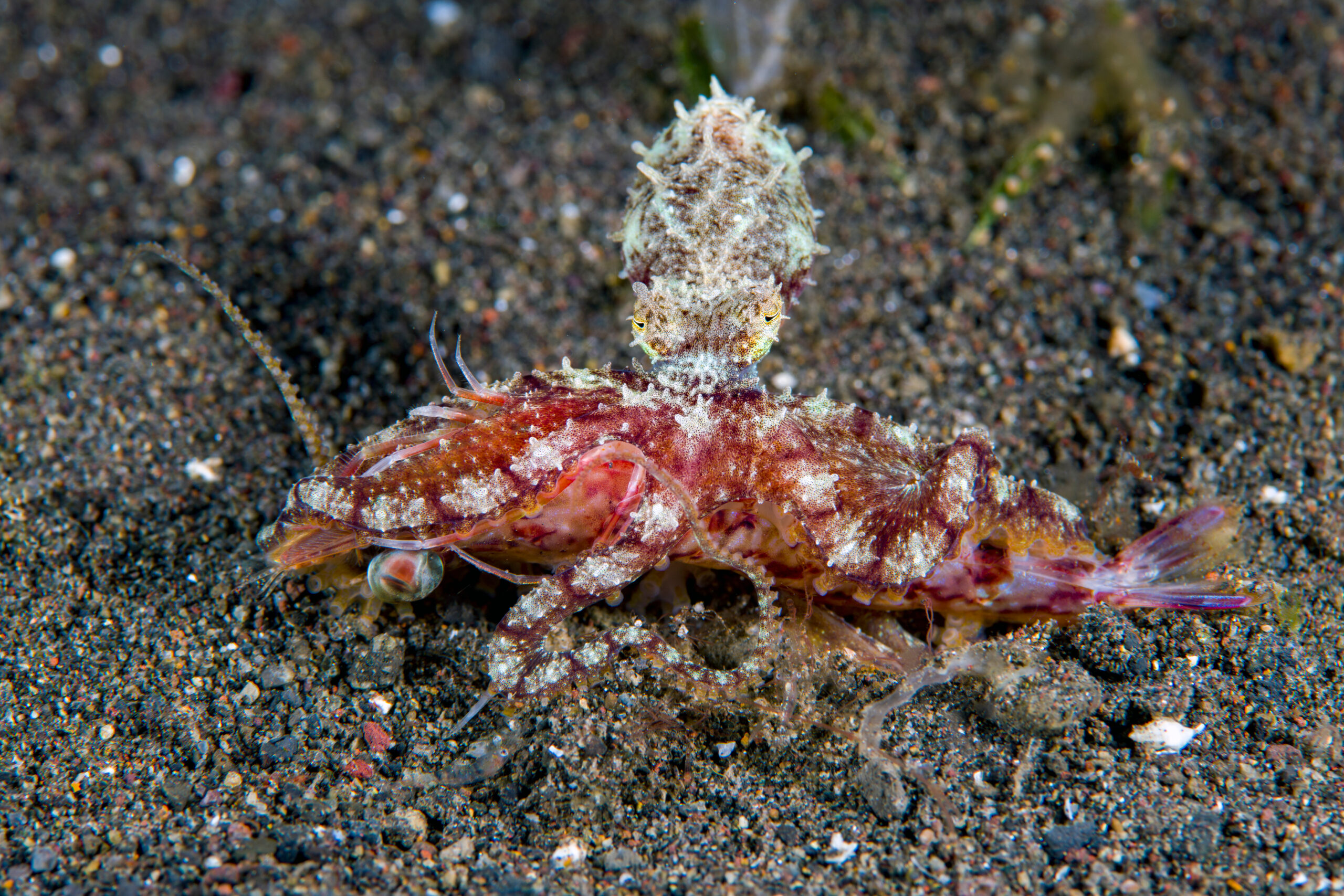 If you have been following OctoNation for a while now and have been educating yourself on all things octopus, I’m sure the question has come to mind- What do octopus eat? Well, today, I am going to share everything there is to know about octopus diets along with what their favorite meals are. Also, stick around to watch a really cool video where an octopus captures mantis shrimp and eats them!

We all need to eat but how we go about making that happen is vastly different depending on what type of animal you are.

While we sit idly by waiting with bated breath for our UberEats to arrive with cooked food specific to our liking, an octopus does not have that luxury (unless there is an underwater food delivery service that I have not been made aware of yet.)

No matter the species of octopus, they all need to search, catch and prepare their meals every time they get that twinge of hunger!

They do, in fact, become an Octo Chef.

Octopus diet- What’s on the menu?

So, it’s finally time to answer the question… What do octopus eat? Octopuses are generally not picky eaters, so the ocean is one big seafood buffet for them!

They typically go for:

These are all on an octopus’s menu. Even so, what octopus eat depends very much on their size and environment!

The Atlantic Pygmy Octopus (Octopus joubini), a little nugget of an octopus measuring in at around 4 cm (1.5 inches), will have very different eating habits than the Giant Pacific Octopus (Enteroctopus dofleini) who weighs over 250 kg (600 pounds) with a 9-meter (30 feet) arm span.

You won’t find smaller octopuses going after the occasional dogfish shark – and even sometimes birds – like their larger cousins. Instead, they feed on:

Freshly hatched octopus babies, who are no larger than a flea, primarily feed on plankton (microscopic animal and plant organisms).

A study looking at cephalopod diets found that crustaceans were an overall favorite and were found in the stomachs of all octopuses, cuttlefish, and squid!

The environment they live in also dictates what octopuses are eating.

For example, the Dumbo Octopus (Grimpoteuthis sp.), who lives at extreme depths in the ocean, feeds on:

They generally are foraging and taking what they can get.

On the other hand, the Common Octopus (Octopus vulgaris), living on a bustling reef bursting with food, can be pickier searching around until they find their perfect lunch.

The only thing not on the menu: vegetables!

How does an octopus catch its food?

As the sun sets, most octopuses head out for the evening in search of a tasty treat. With sensitive suckers, 8 arms, and the capacity to squeeze through any space the size of their beak, not much can get between a hungry octopus and its dinner!

Octopuses use various techniques while hunting which includes, but are not limited to:

The Common Octopus has even been observed using its ink to distract and disorientate its prey before they attack.

Octopus species dwelling on reefs in shallow waters also make use of their excellent eyesight to track down prey. Once they zero in, they can launch a full attack, grasping prey in their web of suckers and arms.

Watch out for those suckas!

An octopus’s suckers are a powerful tool to discriminate between surface textures and shapes and let them “taste” what they are touching. With over 10,000 chemoreceptors cells on a single sucker, octopuses can lazily cruise the reef sticking their arms in rock crevices to see if anything strikes their fancy.

This means that by the time an octopus has something in its mouth, it has already decided that it’s worth eating!

Once an octopus has its prey enveloped in its arms and immobilized, it gets to work preparing its meal for consumption.

If you would like to see this for yourself, take a peek at this video and watch how an octopus captures and eats crab and mantis shrimp!

Octo Chef in the kitchen!

When looking for culinary excellence in the underwater world, let Octo Chef be your guiding light. While they only prepare meals for themselves, inside their mouth are all the tools they need to craft the perfect feast.

Did you know an octopus has a beak?

You can’t have a chef without a knife just like you can’t have an octopus without a beak! Just as knives are meant to dice and cut, an octopus’s beak – much like that of a parrot – is responsible for cutting flesh and busting open clams that are pried apart with their arms.

Octopuses have an underbite! When the mouth is closed, its upper beak fits inside the lower beak.

Look At That Rad Radula!

Next up in an octopus chef’s kit is the radula, a tongue covered with tiny teeth used to slurp clams and mussels out of their shells once they have been broken open.

You can estimate the size and get an approximate age of an octopus just by looking at its radula! The average length and width of the radula, along with the number of teeth, can be correlated to an octopus’s body weight.

Salivary Papilla (With A Kick)

To complete the gastronomic experience, an octopus has another tooth-covered organ called the salivary papilla that lies just below the radula.

When an octopus finds a particularly delectable clam treat that it cannot wrench open with its powerful suckered arms, it uses its salivary papilla. This allows it to drill into the hard shells of clams and crustaceans.

Depending on the shell thickness, an octopus can spend hours drilling (what a terrifying time to be a clam!!).

When they finally make it through, they release a toxic cocktail that paralyzes their meal causing it to loosen the muscle from the shell. Much like getting your kitchen drill (because who doesn’t have one of those) and then using a meat mallet to tenderize your dinner.

Chelsea Bennice, OctoNation’s lead researcher, has observed that most octopus drill holes are close to the attachment site of a clam’s adductor muscle. Pretty incredible that octopuses know just where to drill to be the most effective!

So, why do octopus go through all this trouble to make sure that their food is smashed, crushed, and relaxed before they eat it?

Because their food travels down the esophagus, which passes through their donut-shaped brain, before getting to the stomach.

Luckily, this serious octopus design flaw was course-corrected with an impressive set of mouth tools to make sure that anything entering their body is well prepared and most definitely dead.

So, what do octopus eat? A LOT!

Did you enjoy learning about how and what an octopus eats?

This website uses cookies to improve your experience while you navigate through the website. Out of these, the cookies that are categorized as necessary are stored on your browser as they are essential for the working of basic functionalities of the website. We also use third-party cookies that help us analyze and understand how you use this website. These cookies will be stored in your browser only with your consent. You also have the option to opt-out of these cookies. But opting out of some of these cookies may affect your browsing experience.
Necessary Always Enabled
Necessary cookies are absolutely essential for the website to function properly. These cookies ensure basic functionalities and security features of the website, anonymously.
Functional
Functional cookies help to perform certain functionalities like sharing the content of the website on social media platforms, collect feedbacks, and other third-party features.
Performance
Performance cookies are used to understand and analyze the key performance indexes of the website which helps in delivering a better user experience for the visitors.
Analytics
Analytical cookies are used to understand how visitors interact with the website. These cookies help provide information on metrics the number of visitors, bounce rate, traffic source, etc.
Advertisement
Advertisement cookies are used to provide visitors with relevant ads and marketing campaigns. These cookies track visitors across websites and collect information to provide customized ads.
Others
Other uncategorized cookies are those that are being analyzed and have not been classified into a category as yet.
SAVE & ACCEPT
1.9K shares
1.9K shares
Skip to content