The largest octopus, weighing in at an impressive 70.7 kg (156 lbs) and with an arm span the length of a car, the Giant Pacific Octopus (Enteroctopus Dofleini) is one big cephalopod! Let’s find out how these shy and solitary giant ocean creatures can get in to all kinds of mischief at aquariums. We’ve got lots of Giant Pacific Octopus facts for you today! So let’s rock!

Found on the northern part of the Pacific ring of fire, the world’s largest octopus makes its home in the waters of California, up the coast to Alaska, and over to Russia, Japan, and Korea.

One element all these places need for a Giant Pacific Octopus to call it home: cool, richly oxygenated waters. Kelp forests, rocky reefs, shallow tidal pools, and depths down to 100 meters (330 feet) are just some of the marine environments you might find a GPO.

While most warm-water species of octopus live 12-18 months, the GPO’s life spans 3 to 5 years. Typically, a reddish-brown color, GPO fades to light or marbled pink when they are relaxed or sleeping…

Did you know The Giant Pacific Octopus is referred to as GPO by cephalopod enthusiasts? That’s just one of the awesome facts we are sharing today!

With so many of you asking us questions about the Giant Pacific Octopus on our Facebook and Instagram posts, we wanted to share some more fun facts about this playful octopus.

They have about 280 suckers PER arm!

Doing some quick math, that is 2,240 suckers for ONE octopus!! That is 2,240 extraordinarily complex sensory suction cups that can taste, smell, and grab.

In theory, the GPO could hold up a cinder block, 7 computer monitors, or a four-year-old. Of course, they choose to use this strength to pry open clams, crabs, and other sea life who don’t really stand a chance once those big suckers get ahold of them.

Copper-based blue blood may not be unique to the GPO, but it helps them extract oxygen from the colder waters they inhabit.

Unlike humans with iron-based blood (the hemoglobin makes it red), octopuses have copper-based blood with hemocyanin to transport oxygen around their bodies.

Did you know GPO’s prefer alone time? They make themselves cozy dens within rock crevices where they hang out most of the day, only leaving at night to find food. Once they are ready to mate, they eventually leave their den in search of love.

Beyond that, the GPO is the ultimate ‘Netflix and Chill’ octopus preferring their den to any cephalopod social gatherings.

Ready for the hunt!

When they get a little rumble in their belly, the GPO will leave its den and crawl around the reef using the tips of its arms to probe into areas where prey might be.

Since their amazing suckers can taste and smell, they don’t need to be looking at their food to know what it is.

Imagine wearing a blindfold and having to guess what your food is using your nose and hands.

Once a GPO has dinner in its grasp, it drags it back to its lair to enjoy its meal in peace. They scatter the remains of their meal outside their den, which can give you a good idea of what they eat.

If they are feeling extra ambitious, the Giant Pacific Octopus will attack small sharks and even birds!! GPO have become viral sensations when videos emerged of one drowning a seagull and more recently tussling with a bald eagle (who eventually was saved by fishermen!)

What shape is a GPO’s pupil?

Imagine having two panoramic cameras on the sides of your head!

Having rectangle pupils helps the GPO see in all directions, and it gives them control over how much light they let into their eyes. Super helpful when looking for prey and watching out for predators while hunting at night.

Good luck trying to sneak up on an octopus when they can scan their environment in every direction! This may seem like a unique pupil shape, but goats, sheep, and toads are also part of the rectangle-shaped pupil crowd.

Not only can an octopus see you… they can recognize who you are!

A research study on Giant Pacific Octopuses at the Seattle Aquarium showed that their behavior, breathing, and colors changed depending on whose face they recognized.

Eight different GPOs were treated either by a ‘nice’ keeper who gave them food or by a designated ‘mean’ keeper who poked them with a bristly stick.

After just two weeks of this, the octopuses would approach the nice keeper but hid away when the mean keeper came around.

Mama GPO gives it all up for her babies

The female GPO can lay up to 74,000 eggs. For about 6 months, she stays with her strings of eggs, protecting them, cleaning them, and making sure they get plenty of oxygen.

During this time, she never leaves them, eventually dying of starvation after completing her life goal of passing on her genetic material.

Newly hatched GPO larvae, no larger than a grain of rice, float to the surface where they drift on ocean currents living in their planktonic stage for 30 to 90 days.

Being at the surface makes them very vulnerable to predators, so many don’t make it past this initial life phase.

The lucky ones eventually settle onto the seafloor, where they start rapidly growing. They will increase their body weight by 1% per day – which helps their survival rates immensely. Once it’s the mighty full-grown GPO, it only has the very big ocean beings to worry about like sea lions, otters, and sperm whales!

They are super brainy!

They have nine brains… NINE! One big brain and 8 mini-brains.

One central brain to make the big octopus life decisions like ‘what’s the best neighborhood for a den?’ or ‘that bald eagle looks tasty let’s go have some hunting fun’.

The smaller brains are a cluster of neurons that lets them control each of their arms. This allows them to stick their arm in a hole, taste a mussel and decide to grab it all without bothering the main brain.

It’s probably busy looking around for predators or its next meal item!

Playful yet likes to wreak havoc

GPO’s are an aquarium favorite due to their size and personalities. They can:

Many aquarists will give GPO’s their food in a container that requires some thought to get into to keep them mentally stimulated. Because heaven forbid a GPO gets bored… that’s when the havoc starts.

Did you know they are perfectly capable of opening or closing tank valves? They can also disassemble equipment, blasting water at light bulbs to short circuit the power supply, and making full-on escape attempts down drainpipes!

Sneaky GPO’s will even leave their tank and go hunt fish in neighboring tanks, with some returning to their own tank to act as nothing happened.

How confused would you be as the aquarist who keeps having fish mysteriously disappearing into thin air from your exhibits all while a not-so-innocent octopus is giggling at you from its little den?

The Giant Pacific Octopus- One Of The Largest In The World!

Did you enjoy learning these Giant Pacific Octopus facts?

If you enjoyed learning about the Giant Pacific Octopus, we recommend taking a look at some of these other profiles:

The aliens landed long ago- they just live underwater. A disproportionately sized spouse, a cape that would make any superhero jealous, and stealing jellyfish tentacles to use as their own personal octopus nunchucks are just some of the ways the Female Blanket Octopus leaves us starstruck and truly questioning if the aliens are already here…. 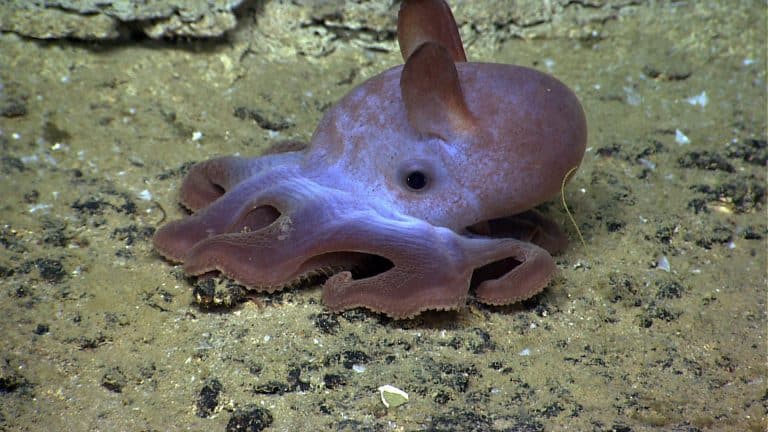