You could swim right past a southern sand octopus and never even realize it! They’re masters of hiding themselves in the soft seafloor. They can both bury themselves and burrow with ease!

To burrow, the sand octopus blasts water down into the seafloor to make it easier to wiggle down into the sand. Then when it’s fully underground, it makes a “chimney” through the sand so it can breathe!

This octopus can shoot out a powerful jet of water to turn regular sand into quicksand!

This species was named and described in 1990! The name kaurna is derived from an Australian Aboriginal clan that inhabited the Adelaide Plains of South Australia.

SIZE OF THE SAND OCTOPUS

The southern sand octopus is a small to medium sized octopus with a mantle length to 85 mm (3.5 in) and a total length to around 420 mm (16.5 in). It has a wide head (slightly narrower than the mantle) with small eyes that do not protrude far above the surface of the head. It’s arms are extremely long (3-6x the mantle length in mature animals) with small suckers and a shallow web. Its funnel is large and slender. Check out the behavior section to find out how this animal uses its long arms and large funnel!

This species is found in the temperate waters of southern Australia from eastern Victoria and northern Tasmania and west to the Great Australia Bight. 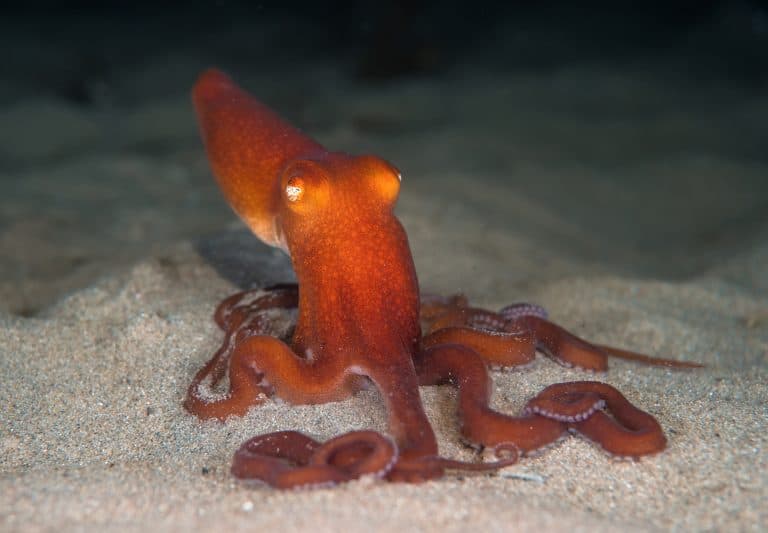 This is benthic, shallow-water species that lives in coastal waters to depths of around 50 m (164 ft). It can be found on sand, mud, or seagrass beds and is able to create sub-surface burrows for its den!

The southern sand octopus remains buried during the day in its burrow and emerges at night to feed on small crustaceans by probing its thin arms down burrows and holes! 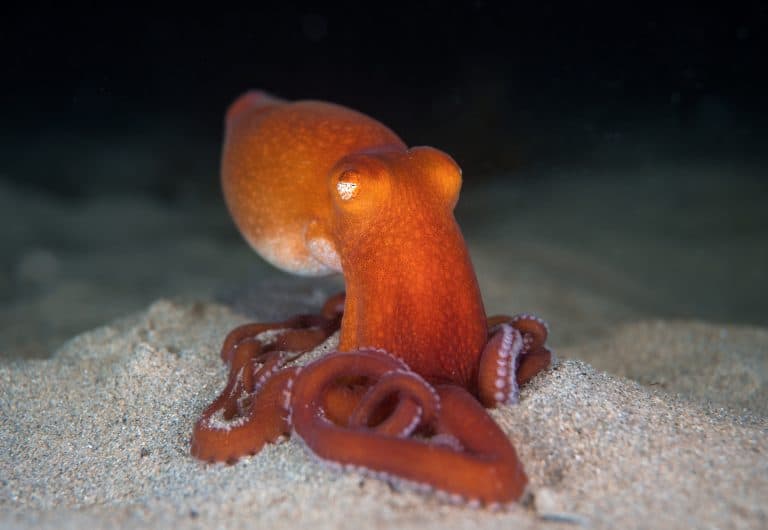 The base color of the southern sand octopus can range from orange-cream to maroon-red. The skin texture is generally smooth or covered with numerous tiny bumps known as epidermal tubercles. These bumps are usually largest on the dorsal surface and less noticeable on the ventral surface of the octopus. This is one species without large papillae over the eyes (aka supraocular papillae)! When foraging, it can have a pink base color with an elongated mantle that has a dark maroon stripe on each side of its mantle.  The mantle stripes can extend across the eye to the arm tips.

CAN YOU DIG IT?

Only a small number of cephalopods use the two behaviors burying and burrowing. Yes, there is a difference! Burying is considered the superficial covering with sediment while burrowing is the active movement through soft substrates where the substrate (like sand) is displaced and the surrounding substrate is often altered.

In a sandy environment where there is no place to hide from predators this species creates a predator proof bunker! But, how do they do this? A team of scientists in 2015 reported the first detailed study of how the southern sand octopus burrows and how it can breathe while residing in this bunker.  The scientists observed octopuses burrowing in the wild and set up laboratory experiments to closely examine the burrowing mechanisms and if different sizes of sand (fine to medium, course, very course) influenced octopus burrowing.

Scientists created an “ant farm” style aquarium to see how this sand-dwelling octopus burrows and it turns out there are 4 stages for the southern sand octopus to create its burrow!

First, the octopus produces its own quicksand! Burrowing begins with the octopus directing its funnel downwards and fully expanding its mantle in preparation for expelling the first jet of water into the sediment. The jetting action of the mantle and siphon inject water into the sediment which temporarily suspends the sand grains in the water or “fluidizes” the sand grains. This increases burrowing effectiveness by reducing drag and the energy needed for burrowing.

Second, the octopus moves its arms in the quicksand while its mantle and funnel remain above the surface to continue the jetting action. Once the underlying sediment is fluidized, the octopus pulls the rest of its body under the surface!

Next, the octopus uses its arms and expanded mantle to push the surrounding sediment away from its body to burrow deeper. Scientists reported the octopus’s burrow ranged from 3-11 cm (1-4 in) from the surface and octopuses burrowed slowest in very coarse sediment because the larger grain size likely requires more effort in fluidization.

After burrowing deeper, the octopus extends two arms to the surface to create a ventilation chimney! Finally, the arms are retracted and there is one last strong exhalation that pushes any loose sand from the chimney. To maintain the burrows structure, the octopus lines the chimney with mucus!

It is also possible that the females release a pheromone (sexually-attractive chemical) out of their burrow’s chimney! Groups of males have been observed swarming over a single female. Females lay large eggs (9-11mm or ½ in long) that they attach singly to hard surfaces. Once the large young hatch, they are immediately benthic and head into the sand.

This burrowing octopus species provides insight into the possible ecology of other sand-dwelling octopuses whose burying or burrowing behaviors have yet to be explored! 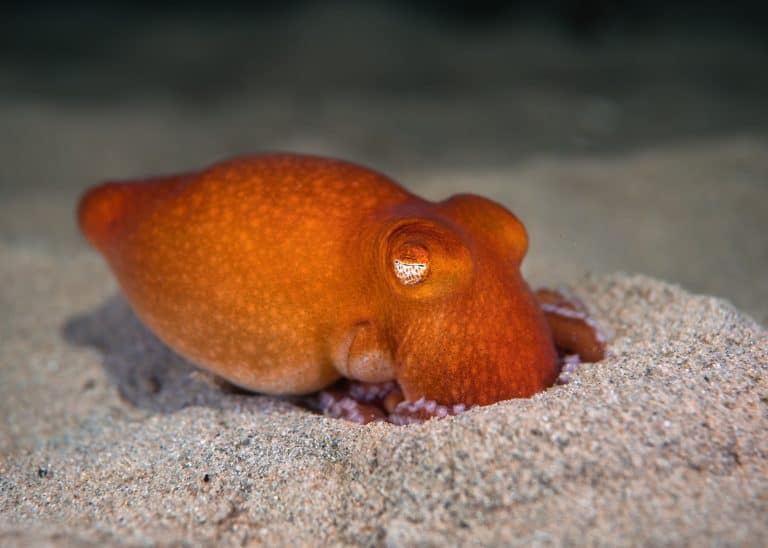 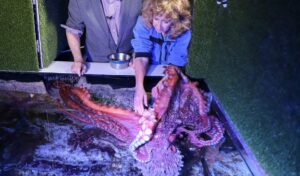 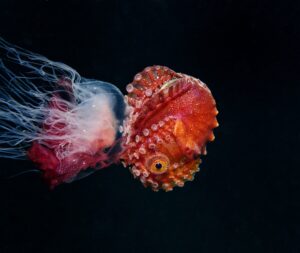 How An Argonaut Shell Is Spun Out Of Their Arms

Today, Danna Staff is going to teach us all about the Argonaut shell! Is it true – do they make their own shells? Let’s find out. 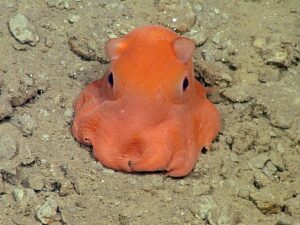 Do Octopus Have Tongues?

Is it true? do octopus have tongues? Read on, and you’ll learn what an octopus, a garden snail, and your cat all have in common! 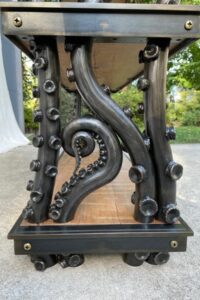 Howdy Nation! In today’s post, we are going to be featuring our ‘Artist Spotlight’ of the week: Karl Saar. He is the owner of Kustom Steeler, where he has used a multitude of skills to build and weld sculptures and furniture since the early 2000s. Today, we are showcasing ‘Kraken Shelves’, his latest octopus furniture 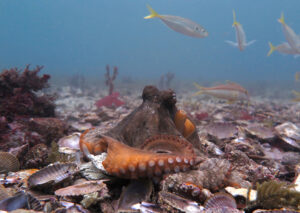 Watch Out – That Octopus Is Throwing Things!

Have you ever seen an octopus throwing things? Well, neither have we! Now’s your chance to see it with your own two eyes. It’s a must!

This website uses cookies to improve your experience while you navigate through the website. Out of these, the cookies that are categorized as necessary are stored on your browser as they are essential for the working of basic functionalities of the website. We also use third-party cookies that help us analyze and understand how you use this website. These cookies will be stored in your browser only with your consent. You also have the option to opt-out of these cookies. But opting out of some of these cookies may affect your browsing experience.
Necessary Always Enabled
Necessary cookies are absolutely essential for the website to function properly. These cookies ensure basic functionalities and security features of the website, anonymously.
Functional
Functional cookies help to perform certain functionalities like sharing the content of the website on social media platforms, collect feedbacks, and other third-party features.
Performance
Performance cookies are used to understand and analyze the key performance indexes of the website which helps in delivering a better user experience for the visitors.
Analytics
Analytical cookies are used to understand how visitors interact with the website. These cookies help provide information on metrics the number of visitors, bounce rate, traffic source, etc.
Advertisement
Advertisement cookies are used to provide visitors with relevant ads and marketing campaigns. These cookies track visitors across websites and collect information to provide customized ads.
Others
Other uncategorized cookies are those that are being analyzed and have not been classified into a category as yet.
SAVE & ACCEPT
626 shares
626 shares
Skip to content