The common Sydney octopus can be easily recognized by its sad-looking white eyes. They’re sometimes called the “gloomy octopus” because scientists long thought this was a solitary species, but it turns out that this octopus isn’t lonely or sad!

Sydney octopuses are actually pretty sociable, forming groups and building dens near each other. One location is so crowded that it’s known as “Octopolis”!

Crustaceans, gastropods, bivalves, each other!

These octopuses create entire underwater cities, made of recycled materials like scallop shells! 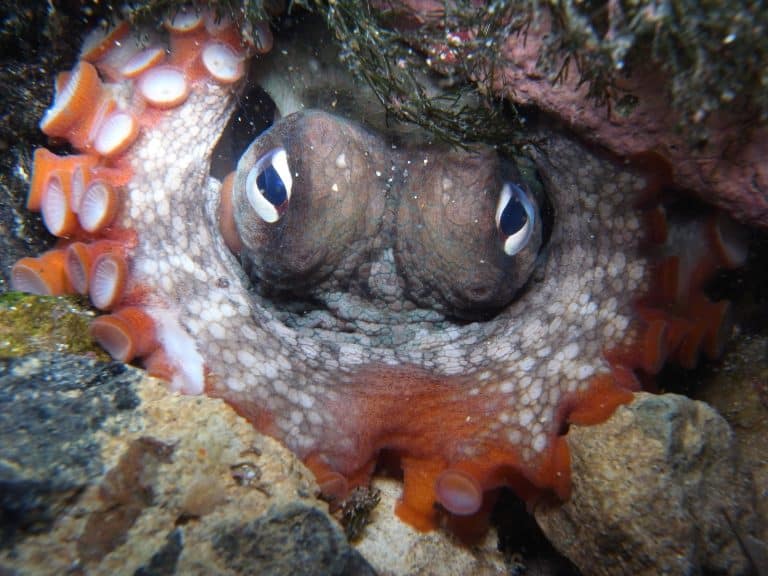 SIZE OF THE COMMON SYDNEY OCTOPUS

The common Sydney octopus is a moderately large and muscular species growing up to 60 cm (2 ft) in total length with a mantle length of 14 cm (5.5 in) and weighing more than 1 kg (2.2 lbs). It’s arms are moderate to long (3 to 4.5 times the mantle length) and larger animals have 220 to 260 suckers on each normal arm. The size and life span of common Sydney octopuses is thought to vary with their environmental conditions.

This species is thought to be very short-lived with an average life span of 11 months; however, environmental conditions can affect development, growth, maturation, and the overall life span. For example, water temperature can influence how quickly eggs mature and how fast juveniles grow.

The common Sydney octopus can be found along Eastern Australia from eastern Victoria to southern Queensland. It is also found along northern New Zealand, but is known as Octopus gibbsi. Another octopus species is found in Western Australia at similar latitudes and is named Octopus tetricus. However, scientists suggest this western form is a distinct but related species. 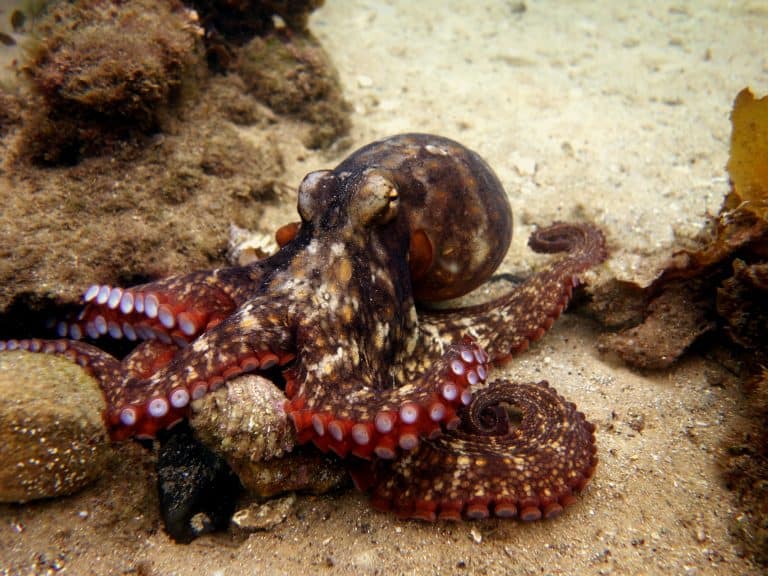 The species can be found on rocky reefs, especially during breeding season, and soft-sediment habitats from depths of 0 m to at least 60 m (197 ft). Their dens are formed in rock crevices or excavated under rocks on sand or mud. They have been found to inhabitat patch reefs over broken or flat reef habitats.

They spend most of the day in their dens remaining alert for predators. At night, they forage for prey on reefs and soft sediment. Their diet primarily consists of crustaceans, gastropods, and bivalves. The common Sydney octopus has been known to be cannibalistic, particularly in association with high densities and post-mating predation of the males by females. 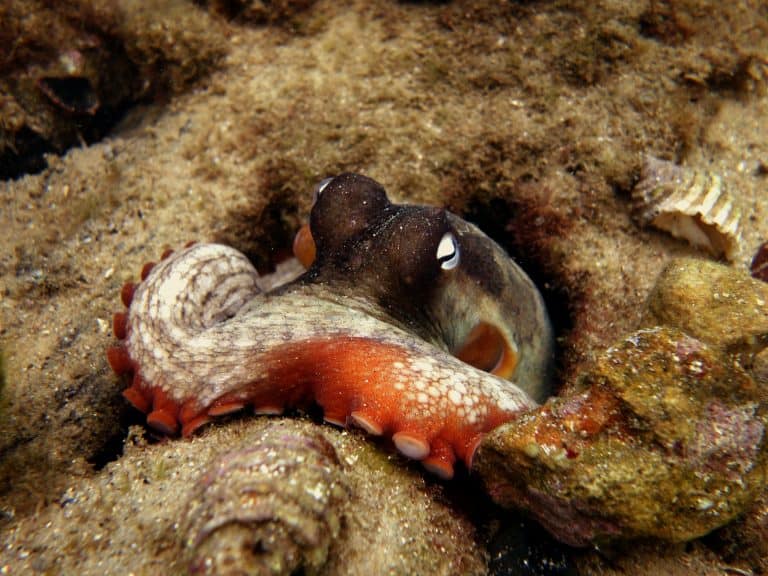 Active animals are typically cream to mottled orange and dark brown with a pair of white spots present on the dorsal mantle. In some color patterns, they can have dark, narrow bands across their arms. This species is capable of raising their skin to have large papillae, which includes four large papillae in a diamond pattern on the dorsal mantle and one above each eye.

When resting inside the den, this species typically has a grey dorsal surface with the ventral (or underside) arms being bright orange and the eyes with a white iris- this gives them their other common name, the gloomy octopus.

Common Sydney octopuses were, for a long time, considered to be purely solitary. However, in 2012, scientists scuba diving in Jervis Bay, Australia, came across a group of common Sydney octopuses all living in a large pile of discarded shells. At this location, the octopuses forage for bivalves including scallops and bring their catch back to the site for consumption, discarding the shells at the site.

These discarded shells were then utilized by common Sydney octopuses to stabilize the walls of their burrows or dens. Sixteen octopuses were observed at the site at any one time giving this location the name Octopolis. With octopuses living in close proximity to each other comes interactions. Octopuses were observed mating and fighting, even during the daytime, and scallop shells might have become projectile weapons!

Shortly after discovering Octopolis, scientists found a second location, dubbed Octlantis, consisting of three rock patches surrounded by mounds of shells where scientists counted 23 octopus’ dens! Next, surveillance cameras were set out for 8 days and revealed up to 15 octopuses!

The octopuses mated, fought, chased, and kicked each other out of their dens. The interactions were so intense that at one point the octopuses didn’t notice or react to a bottom-dwelling carpet shark, Wobbegong, nearby. It is likely that the limited den space may have led to these crowded conditions.

This website uses cookies to improve your experience while you navigate through the website. Out of these, the cookies that are categorized as necessary are stored on your browser as they are essential for the working of basic functionalities of the website. We also use third-party cookies that help us analyze and understand how you use this website. These cookies will be stored in your browser only with your consent. You also have the option to opt-out of these cookies. But opting out of some of these cookies may affect your browsing experience.
Necessary Always Enabled
Necessary cookies are absolutely essential for the website to function properly. These cookies ensure basic functionalities and security features of the website, anonymously.
Functional
Functional cookies help to perform certain functionalities like sharing the content of the website on social media platforms, collect feedbacks, and other third-party features.
Performance
Performance cookies are used to understand and analyze the key performance indexes of the website which helps in delivering a better user experience for the visitors.
Analytics
Analytical cookies are used to understand how visitors interact with the website. These cookies help provide information on metrics the number of visitors, bounce rate, traffic source, etc.
Advertisement
Advertisement cookies are used to provide visitors with relevant ads and marketing campaigns. These cookies track visitors across websites and collect information to provide customized ads.
Others
Other uncategorized cookies are those that are being analyzed and have not been classified into a category as yet.
SAVE & ACCEPT
426 shares
426 shares
Skip to content