Do octopus have tongues? Simply put, yes, they do! But like everything else about our eight-armed sea buddies, they’re much more impressive than you think! Read on, and you’ll learn what an octopus, a garden snail, and your cat all have in common!

When it comes to finding dinner, the octopus has it tough. See, octopuses are carnivores, meaning they only eat meat. But, understandably, things that are made of meat don’t wanna be eaten!

So most of an octopus’ favorite meals spent the last few million years or so developing hard outer casings like shells or exoskeletons to keep themselves from winding up on someone’s menu. But octopuses have developed an arsenal of biological tools to help them prepare their food!

Most octopus have a special, chitinous structure in their mouths called a radula.  Radulae are a lot like your own tongue, well, except for one tiny difference: they’re covered in TEETH!

Once an octopus has a hold of its prey and picked its favorite wine pairing (maybe not that last one), the octopus will dig into its dinner. But when your brain is a donut-shaped bundle of nerves wrapped right around your esophagus, swallowing big chunks of meat can be risky business!

So an octopus makes use of a very special eating utensil: its tongue! Radulae are used to scrape the meat away from hard shells or bones and to break it down almost into a sippable seafood smoothie. (Sounds tasty, right?)

Radulas are perfect for hard-shelled prey! They work together with the salivary papillae to drill holes into shells. AND they’re soft and flexible, which means they can get into all the little nooks and crannies of a creature’s bones, shells, or carapace.

This is why you’d find that the shell remains of an octopus are completely cleaned out, as every scrap of meat would have been slurped up!

As unique as octopuses are, they’re not the only animals with toothy tongues! In fact, most mollusks have them! Garden snails, slugs, and even squids all have radula specialized for their specific diets!

Cats have evolved a similar trick, using their rasping tongues to scrape meat from bones and to help with drinking. Between that and their mutual love of seafood, cats and octopus seem to have a lot in common! (though we wouldn’t recommend trying to rub an octopus’ belly…even if you can find one.)

So how do octopus know what to bite into?

When an octopus touches something with its suckers, it can taste it and decide if it is something yummy to eat or not. Scientists call this ability, chemotactile sensation— and it means that octopus use chemical senses, such as taste, to navigate and explore their environment!

Specialized sensory cells , which are not found in any other animal, allow the octopus to distinguish between food and non-food items and explore their underwater environment in search of food without needing to rely on visual cues.

This makes them superstar hunters who don’t waste any time! They send off their brilliant arms in all directions with hundreds taste sensing suckers into nooks and crannies to find snacks!

Imagine closing your eyes and being able to taste through your hands or feet! It’s wild to think about what this sensory experience feels like for an octopus!

It gets even cooler— when octopus suckers come into contact with an object, sensory cells on the surface of the suckers can detect chemical stimuli, such as the presence of fish extract, and not even need to take a closer look before sending it up the sucker conveyor belt to it’s beak! NomNomNom!

The octopus has the ability create what biologist Dr. Rebecca Tarvin calls a “taste map” of the objects it touches, allowing it to make decisions about what to eat and what to avoid. “They don’t even need to see it. They’re just responding to attractive and aversive compounds.” Says Dr. Tarvin.

Besides their rasping tongues, octopuses have a whole roster of unique tools they use to eat! Check out our blog post here for a look at how octopuses catch and eat their meals! 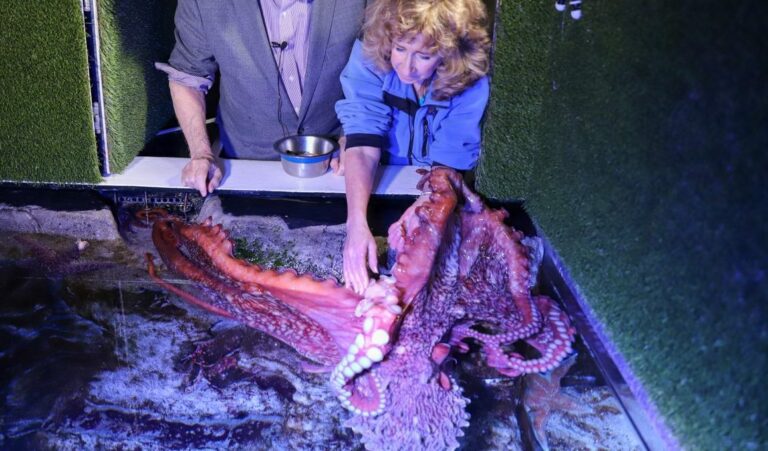 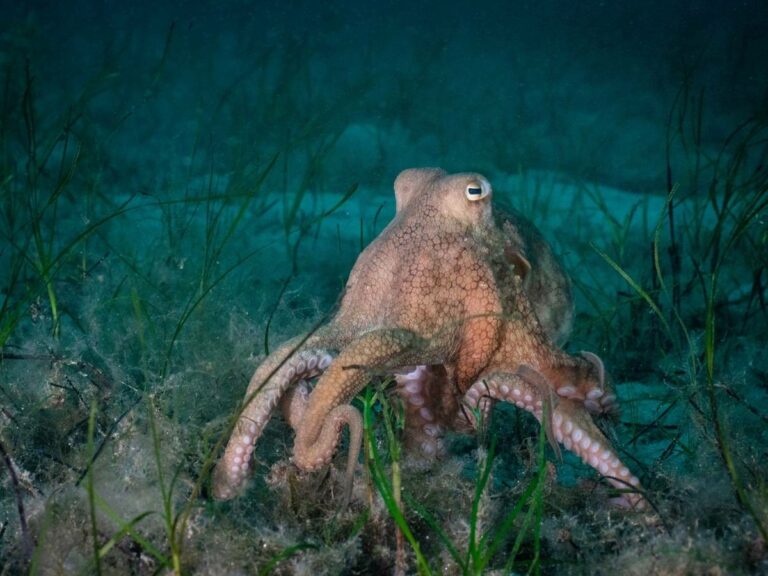 This website uses cookies to improve your experience while you navigate through the website. Out of these, the cookies that are categorized as necessary are stored on your browser as they are essential for the working of basic functionalities of the website. We also use third-party cookies that help us analyze and understand how you use this website. These cookies will be stored in your browser only with your consent. You also have the option to opt-out of these cookies. But opting out of some of these cookies may affect your browsing experience.
Necessary Always Enabled
Necessary cookies are absolutely essential for the website to function properly. These cookies ensure basic functionalities and security features of the website, anonymously.
Functional
Functional cookies help to perform certain functionalities like sharing the content of the website on social media platforms, collect feedbacks, and other third-party features.
Performance
Performance cookies are used to understand and analyze the key performance indexes of the website which helps in delivering a better user experience for the visitors.
Analytics
Analytical cookies are used to understand how visitors interact with the website. These cookies help provide information on metrics the number of visitors, bounce rate, traffic source, etc.
Advertisement
Advertisement cookies are used to provide visitors with relevant ads and marketing campaigns. These cookies track visitors across websites and collect information to provide customized ads.
Others
Other uncategorized cookies are those that are being analyzed and have not been classified into a category as yet.
SAVE & ACCEPT
159 shares
159 shares
Skip to content